Pokemon has too many random encounters and tedium

Prompt: Make a game in a genre you hate

Win all 14 fights by building your deck to win! Choose one of the 3 Battlemals with arrow keys, and then use your mouse to select moves on your turn to damage your opponent and shield from their attacks!

For this week long school project, I was given a specialized prompt to design a Pico-8 game in a genre I hated, since the professor wanted to see what I might make when pushed outside my comfort zone. After much thought, I ended up choosing turn-based combat, Pokemon style battles, as I've grown a distaste for the endless repetitive grinding, lack of strategy in progression, and ridiculously slow pacing in the Pokemon games I once had childhood nostalgia for.  At the time of design, I had been playing lots of online card games like Hearthstone and Slay the Spire, and it seemed like creating a Pokemon moveset as a deckbuilder would be an interesting way to encourage strategized progression, and also differentiate moves by more than just their type and damage. I had to strongly consider the scope of this project, given only a week and also falling close to other finals, so I drew some fun "Battlemal" sprites with evolutions in Aseprite, before starting with the system design for the game.

The game would consist of 14 fights, a gauntlet of enemies you must defeat in succession. At the end of each fight, your chosen Battlemal would be given the choice between four new moves to add to its deck. Occasionally after a few battles, it may be able to evolve, resulting in an HP Boost and a damage buff to the initial cards in your deck. The combat would pit you against an enemy whose target move and damage is displayed. Each turn you have 3 points to spend on cards, which can be used to protect against damage, attack your opponent, or inflict modifiers to yourself or your opponent. The two main modifiers are strength and vulnerability, with strength increasing the base damage of your attacks, and vulnerability making attacks stronger on you.  With these systems in place, it creating a simple yet strong foundation to create play-styles to differentiate each Battlemal.

The idea for this deck style was to be able to build decks with many small-low powered moves, but give plenty of ability to regenerate your 3 action points and cycle through the deck's cards fast. The move "Bullet Seed" and "Trellis" are often the driving forces of decks built with this Battlemal, low powered attack and defense moves that cost 0 action and draw an additional move. There are then supporting cards to it, like Ingrain which increases your strength permanent for each card you play after it on that turn. Since it costs two action points, without using these regenerative cards it effectively would mean that you gain two strength for a total of 3 actions, which is a waste of a turn especially if being attacked. But with them, it becomes a great way to quickly power up your moves to extreme heights.  There are many other supporting cards that can replenish your entire moveset, or give you additional actions at the cost of losing strength or gaining vulnerability. For example, the card "Wilt" replenishes your energy to max at the exchange of three strength points.  Alternatively, the deck can be built surrounding health-leeching cards like absorb and strength boosters, focusing on strengthened leech - attacks over defense to create a zero-sum turn. This is the easiest Battlemal deck of the three to play with.

For this deck, I wanted to play around with what it might look like to strength your enemy and weaken yourself purposefully, only to switch it around and begin to destroy the opponent. This idea centered around the move called "Volt Switch", which swaps your strength and vulnerability stats with your opponent for the cost of two energy. Many cards to choose from for this deck offer higher attack in exchange for weakened stats or the boosting of your opponents. Simultaneously, some of the enemies' telegraphed moves will boost their strength or apply vulnerability to you. Playing this deck requires some amount of timing and deck planning, to keep it small enough to draw Volt Switches often, while diverse enough to offer substantial strength debuffing to yourself and buffing to your opponent, before making the switch and destroying the enemy. Each battle plays as a strategic setup, determining whether you want to switch stats or keep your own. During this slow buildup of stats, additional moves can be acquired like "Flood," which boosts every Flood card in the deck each time it is used, or "Rainstorm," which boosts water attacks for 5 turns to help strengthen even further your final attacks after a setup is complete.

Because of this Battlemal's types, water attacks are incredibly strong against it and will wipe through your health without appropriate amounts of shield. Because of this, along with the fire-elephant sprites I drew, it seemed fitting to make this deck favor defense over attack, bulking yourself up while slowly defeating the enemy. Some initial cards I added like "Entrench" allowed you to double your current defense stat , or "Earth Power," gaining shield equal to the damage you dealt. I realized that while the defensive play felt interesting, without any connection the attack it didn't differentiate itself enough or feel as cohesive as I wanted it to feel. That's when I decided on adding the card "Body Slam" as one of your starting cards, which deals damage to the opponent based on your current defense. This helped guide my process for designing the rest of the deck, with the goal being to increase defense to high levels to block from being hit by extremely damaging attacks or counter with a body slam. One of the rarer cards, "Steadfast," further cemented this idea by making it so your defense will no longer be wiped clean at the end of every turn, instead carrying over for the rest of the fight. This is at a cost, losing 5 strength and making most of your regular attacks incredibly weak or even do nothing. But pairing this card with "Entrench" can take your defense to staggering levels, where once setup completely a body slam will still be able to KO the opponent.

I'm quite happy with what I managed to get done in one week. It definitely could use another week of playtesting so that I could add alternative play-styles for each Battlemal and tweak the card values to be even more balanced. I would've also liked the ability to catch Battlemal's you've defeated and add them to the party like in Pokemon, but I realized the party system + all the additional skill trees and decks I would have to design would be too much additional work. If I continued this project ever, I would definitely first refactor this into Unity or a game engine besides Pico-8, as the 5px font and 128px screen size was extremely limiting in terms of building the battle system user interface cleanly and understandably. 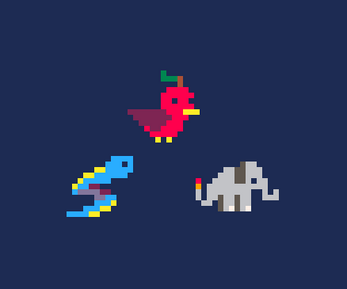